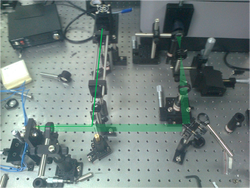 Before investigating gaphene at high temperature, my co-worker and I tested our idea with a preliminary set up. The graphite sample was heated on a stage by electric current and the Raman signal was detected by a monochromator with a PMT attached to the output slit.
Though the set up was rather easy, we observed the redshift of both G peak and 2D peak of graphite, which was expected as a common phenomenon of heated graphite. 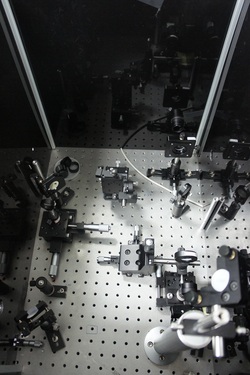 After the preliminary test, my co-worker and I constructed the whole set up of the High Temperature Raman Spectroscopy. The Picture on the left is the optimized version of the Spectroscopy part. The collected Raman signal is detected on a CCD.


As showed in the lower picture, the vacuum chamber is applied for heating. The vacuum system and the spectroscopy system were successfully coupled. Plenty of different experiment can be carried out with this set up. For example, the chamber is also designed as a CVD chamber, which allows us to monitor the CVD growth of samples. 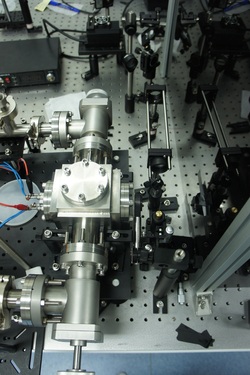 
In our work, we use High Temperature Raman Spectroscopy to determine the TEC of graphene. And we make one step forward. We eliminated the above assumption by introducing another controllable manual strain to estimate the extent of the interaction between the substrate and graphene.  Thus we can determine the TEC of graphene with higher accuracy. (This is a work of collaboration between Zhiguang Zhou and Yudan Su)